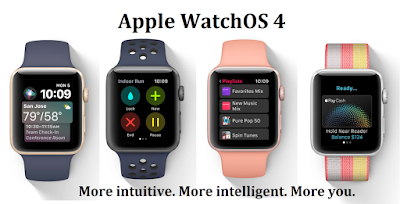 Apple WatchOS 4 Features Guide and Tutorial - Apple watchOS 4 was announced at WWDC 2017, June 5. Here are everything we know about WatchOS 4 features, with guide and tutorial to update your Apple Watch.

Apple Watch Series 3 will launch as a new Apple Watch this year, but the now official Apple is updating the watchOS operating system software, with new features to existing Apple Watch models.

Preview of watchOS 4 on 5 June at WWDC 2017, now you can update WatchOS 4 on your Apple watch to the latest version. Finally become available for general download around September 2017.

Before you update WatchOS 4, remove the beta profile from your device. To view and remove profiles: 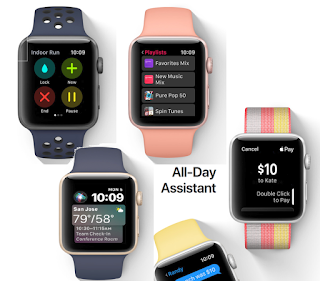 Here's the new Apple WatchOS 4 features in the next version of the watch operating system:

The notifications in Activity are now more personalised to you that you receive daily update information from the moment on your watch. They will let you know if you're close to an achievement, for example. And there's 'smart coaching', which again is personalised to you based on your history and activity records.

Activity and Workout are almost certainly the most popular apps on the watch. Apple is continuing to tweak and add to these apps. As elsewhere, Apple is gradually increasing the influence of personalisation and machine learning.

There's a cool new sparkly animation to celebrate filling your rings in Activity with a new change to the way pool swim workouts work. Apple says that taking a rest at one end of the pool will automatically be detected and be marked as the end of one set of laps and the beginning of another - handy for accurate timings.

We're really pleased that Apple implement two-way data exchange with gym equipment. The accuracy of treadmill-based workouts. You simply need to tap the NFC tag to connect your watch with the gym equipment, although obviously you'll need to find a gym that supports it first. This is likely to take a while to filter out into the world outside.

There's a new High Intensity Interval Training workout on this new watchOS 4, which is great to hear. This is a demanding and highly effective form of workout that uses your heart rate to push you to your limits. The Apple company also realised that notifications aren't important during a workout, so Do Not Disturb will automatically be activated when a workout is initiated.


The Music app on Apple WatchOS 4 has been redesigned, and looks much better than what we have at the moment. There's nice album art, Digital Crown to scroll through seems to be getting far more use in watchOS 4, which is great feature.

The new Music app on watchOS4 again tries to anticipate all you needs. Now the Apple Watch also supports multiple playlists for the first time. This new feature automatically see music and playlists that you listen to regularly, freshly updated on your watch. It also includes Apple-curated playlists including the likes of Heavy Rotation, Favourites Mix and New Music Mix.

Apple claims you'll see faster app responsiveness and better background app performance.There's a new, redesigned dock interface. You can rotate the Digital Crown to scroll vertically through the various notifications and apps on the face. Apple also revealed two other groups of watch faces. First up is the kaleidoscope face, which you can rotate using the Digital Crown, producing a trippy effect. The visual elements rotate and change shape, just like those weird toys everybody apparently loved in the sixties.

Now you able to pay friends via Apple Pay on the Apple Watch with update in OS 4, an Apple Pay Cash account. You can ask Siri to send money and will recive a notification if your friend accept your money.

There are also new Toy Story watch faces, new Disney faces, following on from the popular Micky Mouse and Minnie Mouse faces already available. Woody, Jessie and Buzz Lightyear. These seem to be a bit more advanced, visually speaking, than the previous faces. Mickey and Minnie were animated, but in a fairly limited way. But the new faces incorporate multiple, longer animations that behave differently each time you rotate your wrist. Apple called these vignettes for the character climbing on to the watch face.